Technology Unlocks Writing Style and Maps the Sentiment of Books

Just what is it that makes one work of literature succeed when others fail? Of course there is the writer’s unique “voice;” how they transform ideas into vivid images, feelings and sounds; the scope of their experience; and the appeal of their dialogue (and so much more!).

A number of companies, including Inkubate, are exploring the many facets of writing. Our ScoreIt!™ tool, for example, combines stylometry (a field of study related to how writers use language), artificial intelligence and machine learning to identify the underlying patterns of language in any given text. We then apply statistical analyses to isolate the significant features that define one author’s writing style as compared to other’s.

So, for those of us who have ever wondered, “Who do I write like?,” a ScoreIt!™ Analysis answers that question. The results graphically plot how a manuscript aligns to the commercially published titles in our database for those features that are determinative of writing style: 1) authorial vocabulary; 2) expressive complexity; 3) grammar; and 4) tone.  Below is an example of a ScoreIt!™ Analysis run by California writer Elin Barnes for her title, Justification for Murder.

Peter Sheridan Dodds and Chris Danforth’s Computational Story Lab at the University of Vermont is using sentiment analysis and data mining to map the emotional arcs of stories. There, as reported in MIT Review, doctoral candidate Andy Reagan is looking at how the emotional resonance of words can generate positive and negative responses in a reader when they’re tracked over an entire manuscript. Using over 1,700 titles from the non-profit, free-reading site Project Gutenberg as their database, Reagan and his team have discovered that these resonances create mathematical curves that can be displayed visually and grouped into common sets or “buckets.”

I’m sure you’re wondering whether there may be certain story arcs that are better suited to successful storytelling than others! When Reagan’s team cross-referenced the buckets to the number of times that the 1,700 Gutenberg titles were downloaded by readers, six dominant storytelling arcs were revealed as being the most popular (see below). Here, you can read more about these story arcs, which include the emotional rise of titles like Shakespeare’s The Winter’s Tale and the emotional fall of stories like Twain’s Tom Sawyer, Detective. Much like the high and low notes of music trigger emotional experiences in a listener, it now appears that the same is true for words absorbed by a reader. 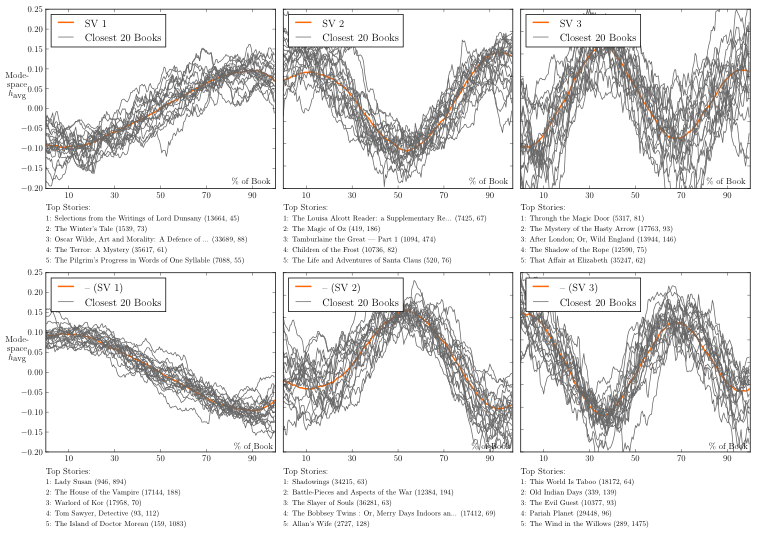 We’ve all read books and wondered how the author managed to construct such a compelling, satisfying journey. Now, technology is increasingly able to unearth at least some of the elements that make a book, its author, and the reader’s experience unique.

While there’s still much to be discovered about the nature of writing and the features and sentiment of language that influence a reader’s experience, we’re now closer to understanding how the words chosen by an author and the grammatical construction and tone of a story impact the way in which stories resonate with readers. And what resonates with readers really does matter to writers! Looking ahead, it’s exciting to imagine how these same insights may inform the way in which academic books are written, in an effort to make them more accessible and more memorable.