History of the Writer as a Young Girl

Inkubate is delighted to share a guest blog by author, E. E. King

One of my earliest memories is of sitting on the steps leading into my parents’ living room and listening to the authors in my dad’s writers group read aloud from their latest works.

My father, Dolph Sharp, was born in 1914 in Long Island N.Y. As a young man, he wrote reviews and satirical shorts for a Hempstead, Long Island paper, later moving to Tucson and then to California for health reasons. Daddy made his living writing fiction for magazines like Colliers, The Saturday Evening Post and Women’s Day.

One of his works, “The Tragedy in Jancie Brierman’s Life,” was published in The Best American Short Stories of 1948. Buoyed by this success and looking for literary companionship in this new city, he set out to start a writers’ group. Searching through the Table of Contents, he called all the writers living in Los Angeles.

Not long after, Ray Bradbury, Sanora Babb, Wilma Shore, Joseph Petracca, Elliott Grennard and Ben Maddow met, along with my father, each week, at Canters Deli. Over pastrami on rye with pickles and sauerkraut, they shared stories. My mother offered to pick up the deli supplies and host the meetings at our home in the Hollywood Hills.

And so, for over 30 years, they came to Blair Drive. The house is built on the hill. One enters on the top floor and descends a few steps into the living room. Gathering around the coffee table, they would read their works and comment on one another’s projects. There were drinks and smokes and laughter…always laughter. Sometimes their spouses and other writer’s would join.

I remember hearing Ray read drafts of the The Halloween Tree, which started as a painting, then became a short story, a screenplay and finally a novel. Ray loved words. He was drunk on language. These were always the best of times in our house. The group formed in the 1940s and lasted all the way to the late 1970s when my father became too ill to host. The group started and ended with him.

Ray and my daddy were always each other’s biggest fans. Poking around at my mom’s house, I found an old envelope decorated with daddy’s doodles. Inside were Xeroxed articles about Ray with notes by daddy. Dad had been planning an article. Sadly, it remains unfinished. I wanted to take it to Ray, but it’s a mess! Those were the days before spell check.

However, I thought I’d jot down some of dad’s ideas and stories. I can hear my daddy’s voice reading them….

If by some chance a knowledgeable martian should arrive on this globe seeking a spokesman for his own planet, he would likely get in touch with Ray Bradbury. Ask any 10 sci-fi/fantasy fans who is the world’s greatest writer?” and 9 of them—perhaps all 10—will reply Ray Bradbury…

He’s versatile, with shades of John Collier, Shakespeare, Sherwood Anderson, Styron, Poe, Jules Verne , Herman Melville and Mark Twain. As bullish on America as Merrill Lynch (that is so dated!). A poet. A one-man creative mill…

When he was just starting out, he would visit bookstores that carried his stories. A girl named Maggie was working in one such store. She becamesuspicious of the ebullient young man who would show up regularly to putter around with the books on the shelves. She took to watching himclosely to see if he was stealing. It turned out that man was Ray Bradbury and all he was doing was rearranging the books so that the few storiesby him would be more favorably displayed. In the end, Ray and Maggie married.

He has never flown in an airplane… “I have too many children dependent upon me,” he says, pointing to his head and referring to the characters he is yet to write.

Almost anything can set a story rocket off in his mind. Back in 1948 he was walking alone along Wilshire Boulevard—Ray walked at all hours—when a patrol car stopped him. People just didn’t walk in LA. The policemen gave Ray a hard time before he convinced them that he meant no harm. When he got home, he wrote a story about life in the year 2053. It was a criminal offense to leave one’s house and walk. The violator was taken away by a radio controlled vehicle to a correctional institution…”

Last week, I was reading my children’s book to him, The Adventures of Emily Finfeather. He loved it because it deals with an outcast…Ray himself was such an outcast. When he was eight, his classmates mocked him for collecting Buck Rodgers comic books. In order to be accepted, Ray burned the books. Afterwards, he became depressed and wondered why. Then it dawned on him…it was because he had burned Buck! “These people were not my friends,” he said. “My friends would not have told me to burn Buck!” Later, Ray would have much more to say about the burning of books, but that is another story.

Ray determined never again to let other people influence him or his work. To this day, he touts the importance of writing daily. Being true to your own voice and following your own star is Ray’s recipe for writers. Every time he sees me he demands, “Are you writing every day, Evie?” and I know I had always better say yes.

All these years later, Ray thinks that the writers group worked so well and lasted so long because they were all so different. They were screenplay writers, architectural critics, magazine columnists, songwriters and scriptwriters. Joseph Petracca, wrote of his Italian roots in NYC, while Sanora Babb recalled the Dustbowl of the Depression. Wilma Shore wrote for the New Yorker, while Peg Nixon wrote about her childhood in South Africa. And my father penned semi fictional/semi autobiographical tales of the New York Jewish Brierman family. “There was no one stepping on anyone else’s feet,” Ray said. 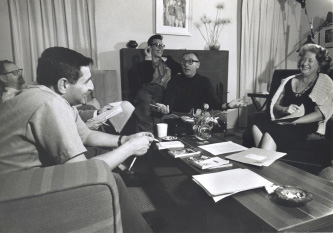 In my father’s notes I found this description of the man I still know and love today: “He looks like a bear of a country squire, congenial and kindly. His hair is now gray and fashionably full. He wears heavy horn rimmed glasses, behind which his eyes may crinkle in a smile, but he never misses a thing. He’s full of ideas and opinions and is never shy about expressing them no matter where; and, he’s gives a lot of time to young writers he considers talented.”

How true. To this day, Ray asks me to read him my stories and he always gives me his candid comments. He says, “Throw it up in the morning and clean it up in the afternoon!” And I do.

Ray’s most recent interest in young writers involves Inkubate. He says that promising writers need a venue where their work can be discovered. In the old days, writers like my father and Ray could make a living selling fiction to magazines. This is no longer the case. The writer’s world is different. During my visit with him, last week, Ray endorsed Inkubate, saying, “Inkubate is giving voice to new writers as well as resurrecting those that should not be forgotten. I am so happy that they have posted three of Dolph Sharp’s published, but out of print works. Inkubate is the place to discover talent.” I agree.

For every published short story, novel, play or poem, there are likely to be a hundred or more just as good, unpublished works, stowed away in drawers and on shelves.

We invite you to open the drawers, empty the shelf and let the story begin by joining Inkubate.